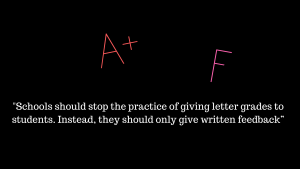 In English literacy this week, our facilitator gave us a topic and some source related to the topic to research about. The topic was”Schools should stop the practice of giving letter grades to students. Instead, they should only give written feedback”. There is two ideal side in which they are Agree and Disagree. This is kinda like a MUN/Debate or we can call it Philosophical Chairs. It is a process which when you are debating, you can change side if you feel like it. This is your choice and if the other team is convincing enough for you to actually think it’s true, then changing side is a very good option. There are so many students to want to stay in the middle(abstain) but we only have two choices so we choose what side we think is better or to be more realistic, the side that we think is very strong. Well, we actually have an equal side which was surprising. For me, On one hand, I agree to eliminate this topic because when the kid gets an F on their test, there is a chance that their parent might not be happy with them. They will either receive punishment or get the blame for it. This will lead to the child having no hope and courage to continue their learning. On the other hand, getting graded also encourage the student to want to study more. It was a very fruitful and respectful debate as we listen to each other points and ask some questions. I think that this is a very debatable topic and it is a problem that we don’t really focus on. This is also a jolly good event for us to get to know more of our friend’s nature. It is an event that allow us to see the savage, calm and the really joyful side of our friends who never show it during normal but only on the debate time. Tell me what side you’re in(Agree or Disagree) and tell me some valid reason.

Have you ever read a meaning of a story so different from the actual story that you thought it was a mistake? Well, This Friday in Hannah’s class, we were reading a story that was written by Roald Dahl. The story name was ”Poison”. The story goes like this, a guy name Tim live with a guy name Harry. When Tim return home, Harry told Tim that there a snake on his belly. Tim couldn’t see it because Harry body was covered in blanket. Then Tim proceed to call Dr.Ganderbai. He was describe as a little Indian man. He came and manage to shoot a syringe into Harry’s body. After a while, He use a liquid that would freeze the snake. After waiting for about 15 minutes, he then tell Tim to get ready and pull the blanket. When they both pull it, all they see was nothing. Harry said that the snake might go into his pyjamas and when Dr. Ganderbai heard that, he started to get ready to strike the snake again. For a moment later, Harry jump out of the bed as if he got bitten. But when he stop, there was nothing there. Dr. Ganderbai said that Harry need to relax a bit because he might be day dreaming. Harry then said that Dr. Ganderbai thought he was lying and he call him “a dirty little Hindu sewer rat!”.

Liger leadership Academy students are English Language Learners. They have been immersed in English since arriving at Liger, We pride ourselves on prioritizing process over product. Please excuse any English errors as part of the learning continuum our students have taken over the years.